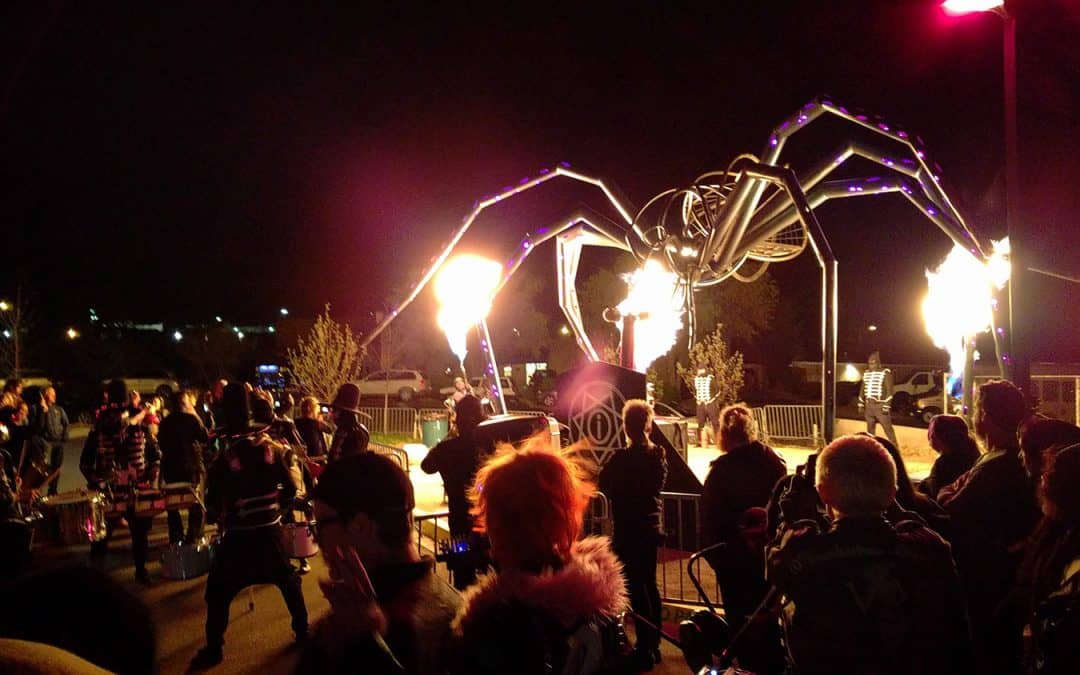 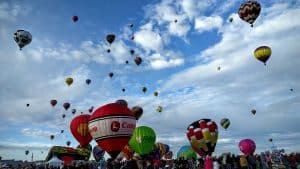 October 2016, Patrick and I headed to Albuquerque for the Balloon Festival, which was a fantastic time.  While we were there, I noticed someone with a hat that said Meow Wolf.  I thought it was a bit of an odd phrase, maybe a band I hadn’t heard of or something, and promptly forgot about it until we were driving back to Colorado.  We decided to stop off in Santa Fe for a few hours of exploration and, on the way, we noticed a billboard that said Meow Wolf.  Curiosity piqued, I had to look it up, and what I discovered was so intriguing that we immediately changed our plans.

Meow Wolf is an artist collective that formed in 2008.  Together they created art installations, education initiatives, concerts, and participated in political activism.  Then, in 2015, they received millions of dollars in funding from George R. R. Martin to create an art complex and an immersive, interactive, permanent exhibit called The House of Eternal Return inside an old bowling alley.

So, 9:45am, we screech into the parking lot, having no idea what to expect, and see a line of people filling the entrance already, waiting for the doors to open at 10am.  We dutifully step into line, wait in absolute perplexity, file in and purchase our tickets, before we are directed to a nondescript door.  When we opened the door, our jaws dropped because, inside this building, stood a perfect, two-story victorian house.  We discovered that the house had been partially transported to another dimension, and we had to find out why and how.

We found out close to nothing.

We spent 3 hours tearing through the place, discovering as many secrets as we could, and more kept appearing.  Parts of the house seamlessly transformed into others.  Carpet from the living room curved into grass and crawled up the most magical treehouse that you could scramble into through an intricately-formed spiraling staircase.  Lights, shapes, and colors sprouted from the most unexpected places.  Anything that you could imagine could be touched and played with and could emit light and sound.  Secret doors and passageways appeared in every place you could dream of.

It was truly the most magical place I had ever been and I found myself completely transported to another dimension, which brought to mind something else close to my heart….our favorite band, Itchy-O.  Their concerts force you into their reality.  There is no real stage, we are all part of the experience and every single show is a different beautiful world of chaos and rhythm.

So, as Patrick and I stood under the treehouse, spinning in wonder, I turned to him and said “Oh my god, could you imagine if Itchy-O played here?”  His eyes lit up and he smiled widely, “I was thinking the same thing!”.

3 months later, Itchy-O announced that they were performing at Meow Wolf.

Approximately 3 seconds later, we bought our tickets and booked our hotel.

Last weekend was the show and I might never be the same.

Starting outside under the giant, glowing Meow Wolf metal spider sculpture,  Itchy-O erupted with fire and fury.  The Chinese Lion teased us as it pranced through the crowd, Rabble Rousers literally grabbed people (ahem Patrick) and threw them into the dancing melee and, as the clouds opened up and began to sprinkle rain with perfect timing, the band led us into the fantastical realm within Meow Wolf.  Together we tore through the space, following the sounds of drums echoing off the walls of a space portal and a deserted RV and, as a group, exploded into convergence at that very spot where Patrick and I stood months before to watch the performers creep and crawl and prowl and dance under the treehouse around the main drummers before marching off to the larger area to entrance us for the next hour and a half.

If you want a glimpse into what the show was like, take a peek at the video below, and if you want a glimpse into what our weekend was like, and a look at Meow Wolf, then check out the video below that!  WARNING:  The second video contains spoilers of some of the Meow Wolf surprises so if you don’t want any of the magic exposed then don’t watch it and rather start planning your trip to experience it for yourself!