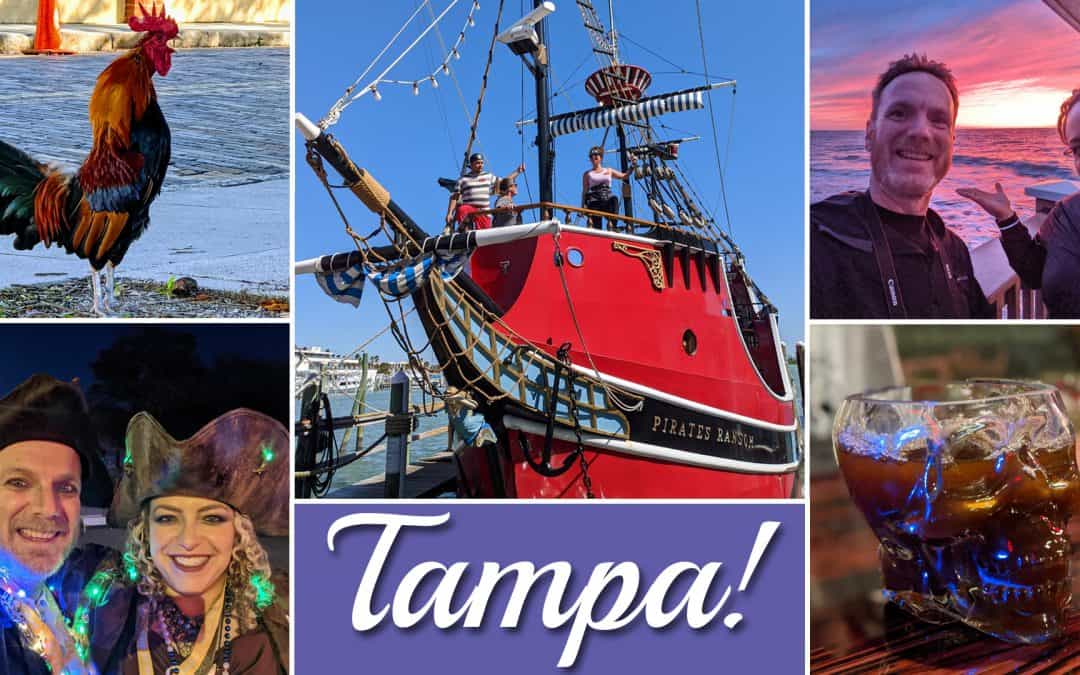 In early February, we left a snowy and cold Denver for a weekend getaway in Tampa! The main purpose of our trip was to take part in the Knights of Sant’ Yago Illuminated Knight Parade as guests of the Krewe of Sir Francis Drake. The parade is a smaller version of the famous Gasparilla parade.

We arrived in Tampa on Friday and went immediately to Pirate Fashions to upgrade our pirate costumes. The store is amazing and we both spent way too much money. After that, we went to Clearwater. I had heard that they have lots of street performers and stuff in the evenings. We got there in time to catch a spectacular sunset. We only saw one street performer, but did get to enjoy some live music at a taco place.

After checking in to out hotel in Ybor City, we walked around a bit. We just happened to find a really cool and creepy speakeasy that was called the Spookeasy Lounge.

Early the next morning, we left our hotel and immediately ran into one of the famous wild roosters that roam Ybor City. We visited the local market where we ran into Jen from Buddy Bandanas. She is the original creator of Buddy Bandanas back in 2006 and now there are several copycats. You should definitely find her on Facebook if you are interested in quality bandanas for your pets! We also had brunch at Gaspar’s Grotto, where Liv also got to ring the world’s largest tip bell!

Before long, it was time for the Illuminated Knight Parade! We were guests of the Krewe of Sir Francis Drake. They created the world’s first fully accessible float. It was great to meet the Krewe behind this welcoming float and walk in the parade with them. After the parade, we checked out some after parties before finally calling it a night.

In the morning, we had breakfast and visited my uncle, aunt, and cousins before going back to Clearwater for a pirate themed cruise with Captain Memo. After the cruise, we had to leave the warm weather of Tampa and head back to a snowy Denver.