‘I used to be a sprinter’ 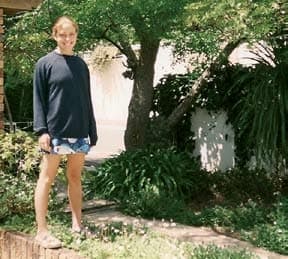 Liv is applying for a grant for a running leg. You see, health insurance companies don’t consider it essential to be able to run. But I do. And the people at the Challenged Athletes Foundation (CAF) do.

While our donations won’t directly buy Liv a running leg, they will help CAF with their annual grant program that enables people with disabilities obtain running legs, adaptive bikes, etc. so that they can live healthy, active lives.

Let’s all show our support by helping Liv meet her goal of raising $2,000 for the Challenged Athletes Foundation by October 21st. And before you know it, Liv will be saying, “I am a sprinter — again!”

P.S. If you need to know how determined Liv is, just read the article below written by her mom about 10 years after the bomb blast. The words are powerful. It is hard for me to read them, but it helps me understand how truly amazing Liv — and her family — for getting through such a crisis. The bombing doesn’t define who Liv is, but who Liv is defined how she dealt with the bombing.

For most, the 28th of November is just another day; for my daughter, Olivia Milner, it’s the day she lived – the day she didn’t die. On that day in 1999, a pipe bomb was detonated at St Elmo’s Pizzeria on the Camps Bay beach front in Cape Town.

It was one of those glorious, windless summer afternoons when locals and tourists descend in droves upon the beach, and throng the shops, restaurants and pavement cafés. The bomb, concealed in a backpack and left at a table on St Elmo’s crowded patio, was clearly intended to kill and maim as many as possible. A waitress innocently brought it inside to the counter where Olivia, just 16 and working her first shift of her holiday job, was standing. She bore the brunt of the explosion.

Reading the Sunday papers in my kitchen two streets away, I heard the blast. Anxiously, I called Olivia’s cellphone, then St Elmo’s main line. Nothing. And then the sirens began. With terror in my heart, I ran helter­-skelter down to the beachfront. Chaos. Devastation. Where St Elmo’s had been, there was a black hole. Among the walking wounded, my child lay on a stretcher, covered with a blanket, surrounded by members of Metro Rescue and police.

She recognised my voice although she seemed not to see, and my immediate fear was that she’d been blinded. Her skin looked unscathed but her shoulder-length hair was singed to a bob and felt like wire. She complained her knee hurt, and kept repeating, uncharacteristically, ‘I love you, Mom,’ and I knew  that she was aware that something catastrophic had happened to her and that she was in mortal danger.

According to a paramedic who accompanied her on the airlift to Milnerton Medi-Clinic, Olivia remained conscious throughout the ride though, fortunately, she remembers nothing. She was horrifically injured: her right leg was blown off below the knee; her left leg was broken in three places, the calf blasted away, her toe smashed. She’d sustained massive soft-tissue injuries, extensive burns, and a skull fracture. The good news was that there was no brain damage and her sight was unaffected. Her left hand and arm were badly burned and it seemed she’d instinctively brought up her hands to shield her face, which, the trauma doctor reassured me, would not scar. The plan of action, he said, was to keep Olivia in a drug-induced coma so they could perform surgery every few days to remove the masses of contaminated material from her wounds and start the process of grafting skin … if she made it through the night. For the first time I realised that she might die and that I needed to call and tell family members to get to Cape Town as soon as possible. By then, friends had converged, offering support, love and practical help. Olivia’s own friends arrived, howling en masse. I clung to each of them, as if I could somehow capture their vitality and transmit it to my child.

Olivia survived, thanks to the extraordinary care she received and to her own youthful resilience, but it was several weeks before the doctors could say that she had rounded the corner of extreme danger and that they were ‘cautiously optimistic’. By the Christmas weekend, she was finally weaned off the drugs that had kept her sedated. She still had a tracheotomy tube in her throat and couldn’t speak but I was desperate to communicate with her. Cautiously, but not too gravely, I explained she’d been hurt in a bomb blast. Her sister, Alexia, and I waited nervously for a response. She mouthed something. ‘What? What are you saying? What  is she saying?’ we clamoured. More carefully now, she silently articulated the word: ‘SP…R…ITE’.

We were ecstatic – we had our girl back, and immediately set the place in an uproar to find a can of Sprite. A few days later, with great trepidation, I told Olivia she’d lost her leg. She asked, politely, if she could scream. Since the only other person in ICU was comatose, I said, ‘Sure, scream away’. One of Olivia’s doctors entered the ward at that moment and, despite my protestations, sedated her all over again, setting her recovery back by about four days.

By New Year’s Eve, she had all her wits about her and was ready to be wheeled out in her hospital bed, no longer on a ventilator but still attached to IV drips and monitors, to watch the fireworks and the Millennium plane from the helipad where she’d landed a month earlier.

In mid-January, we went home: Olivia and I to Camps Bay; Alexia, who had flown from Colorado, back to America. Our home now sported ramps and rails. Between us we had to learn how to transfer from a wheelchair to a toilet seat, into the bath or to a car. I attempted everything first on her behalf, trying not to use my right leg. The first time we ventured out together, for a short drive around Camps Bay, we were both elated – it felt like a major excursion. Triumphantly pushing Liv up the driveway from the garage onto the little bridge a friend had installed, which lead to the garden path, I accidentally tipped her out of the wheelchair. I screamed and she screeched with laughter. In relief, I collapsed on the ground next to her where we giggled hysterically and invented newspaper headlines: ‘Bomb survivor murdered by mother’ and ‘Mom turfs amputee out of wheelchair’.

Not everything had a funny side. Some wounds took months to heal: Liv’s underarms, where the elasticised gusset of her T-shirt had burned deep into her flesh; her back, donor site for numerous skin grafts, which itched unbearably as it healed; the crater in her calf. In addition, her upside-down sleeping cycle – common for people who’ve spent long periods in ICU – meant she simply couldn’t sleep, sometimes for days on end, a problem that persists today.

Olivia’s real return to normalcy began when she met Stephan Kritzinger, the inspired prosthetist who, with skill and kindness, literally put her back on two feet. Her spunk and Stephan’s brilliance got her to her boyfriend’s matric dance in 2000, in ball gown and takkies, and onto the ski slopes of Winterpark, Colorado later that year. When we left for America in 2002, Stephan was one of many losses Olivia had to bear.

Olivia has, slowly and painfully, made a life away from South Africa. She has a husband, a home, a dog, and a degree in industrial design, having held two jobs on campus to help pay her fees. She’s a crack pool-player and she drives herself around, avoiding highways so she can rest her leg at traffic lights. Since she can no longer play piano or clarinet with her former degree of facility – two fingers have severed tendons and her left arm doesn’t straighten – she performs her own compositions on guitar and keyboards, and plays djembe and doumbek in a drumming group.

Olivia in 2009, playing pool at home in Denver, Colorado – she’s top of her local pool league.

Nevertheless, she lives daily with the consequences of the bomb blast. Like most amputees, she suffers with frequent cysts that make walking painful, sometimes impossible. Her sweat glands don’t function properly, and she’s lost the hearing in one ear as a result of scarring. Worst of all, she is plagued by constant, debilitating aching bones and joints. And if she needed any more reminders, a large piece of shrapnel recently found its way to the surface of her hip.

Olivia deals with these issues with pragmatism and good humour, never looking back. In January 2000, still in hospital, she readily agreed to then FEMINA editor Jane Raphaely’s suggestion to spearhead a campaign to promote awareness about the terror threat in Cape Town. Mattie Duddy, who suffered similar injuries and whose husband, Brian, died in the Planet Hollywood blast at the V&A Waterfront in 1998, and Bruce Walsh, who lost both legs at Planet Hollywood, agreed to participate. Only months later, these three survivors began work on the project together with photographer Jan Verboom and Bester Burke D’Arcy agency. It came to fruition in July 2000. The text of Olivia’s ad, shown in the space of her lost limb, read: ‘We can’t bring back Olivia’s leg, but we can restore a sense of security in South Africa. By being on the look­out for unattended bags or parcels, we all try to make a difference. Because you can’t predict a bomb attack, but you can prevent one.’

This picture appeared in a 2000 ad campaign, supported by FEMINA, with the following wording in the space of Olivia’s lost limb: ‘We can’t bring back Olivia’s leg, but we can restore a sense of security in South Africa. By being on the look-out for unattended bags or parcels, we all try to make a difference. Because you can’t predict a bomb attack, but you can prevent one.’

The night before the bomb, I produced a concert to pay tribute to the diverse talents of South African musicians. Olivia was there – creamy-skinned and long-limbed, wearing a miniskirt for the last time – enthralled, and excited to be starting her job the next day. I was full of hope for the future, for my daughter’s future, in our beloved country. The irony of that sentiment is hard to avoid, but Olivia is neither angry nor vengeful. Her standpoint has always been that to seek retribution is to lower oneself to the level of the bombers, whom she views as pathetic cowards.

It is widely believed that PAGAD (People Against Gangsterism and Drugs), a vigilante-style organisation, was responsible for most, if not all, of the bombings that took place in the Western Cape between 1996 and 2000, for which no arrests have ever been made. As my family celebrates Olivia’s life, 10 years on from the St Elmo’s bomb, we honour those whose lives were damaged or destroyed by these dastardly attacks.